A Miracle Amidst Devastation

Sr Joan left the Center on the morning of 1st July to go on a pilgrimage to Assisi with her Franciscan sisters and brothers. In the evening the neighborhood where we live was hit by a tornado, force EF2, with winds over 120mph. Since we live on a hill amidst 57 acres we were badly hit, over 90% of our forest was blown down. The tornado covered a large area, with the three towns in our area, Jackson, Webb Lake and Scott badly hit. Some were not as lucky as us, and lost buildings.

I arrived on Monday, 18th July, after working in a parish in Darien, CT. I entered Leef Rd, and could not believe it – the local county was cleaning up the road, trucks taking huge loads just of stuff lying on the road. John Friese, who looks after our property met me and led me up to the Center, much improved from what it had been originally, when it took them 4 days to clear a path in, and restore power. But it was still a shocking sight to see that day.

There were (and are) trees everywhere, but chain sawed so that they did not cross our drive any more. Also a canopy of trees above and bent with branches and leaves just a metre above the roof. The driveway has a circle, but that wasn’t evident,the bottom half buried under trees and branches. A huge red pine, 30 metres tall, that had stood beside the garage was down on the ground broken about 3 metres from the base. If it had broken closer to the base it would have hit the house. But nothing had touched the building!!! A miracle!!!

On the front side of the house, 4 huge trees had all fallen facing the road, if one had fallen the other way the house would have been crushed. But it wasn’t! The garage has a hole in the roof where two trees fell on it, but it is still standing, and will only need a little structural repair to be whole again. We are very lucky.

One advantage about living in the country is that we receive country hospitality! People have been wonderfully kind, even to crying with us at the destruction. However in recent months we have heard much more tragic stories about whole cities wiped out with hundreds of deaths. Our loss does not compare with those who suffered loss of life.

A logging company has been commissioned to clean up our forest. It will never look the same in my lifetime, but in the next generation new growth will appear, and people will enjoy it again. I hope it leads them to see the creative beauty of God. 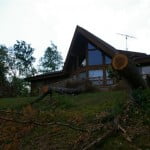 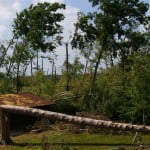 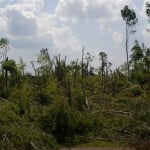 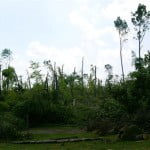 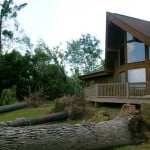 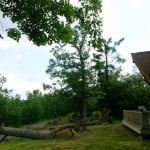 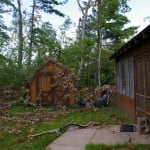 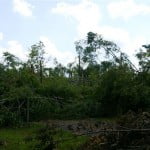 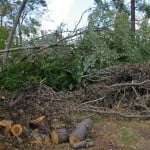 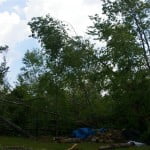 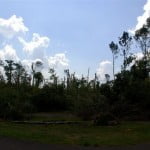 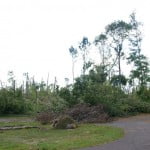 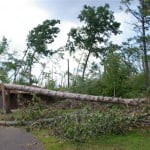 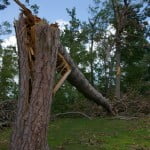